The key success to monetize traffic on your websites is efficiency. For its improvement you need to constantly track traffic stats, revenues and expenses, in case you buy traffic. To eliminate loss-making activities and to support the profitable ones you need detailed statistics, where you can identify such activities and their results.

Monitoring campaigns performance can be difficult when you use multiple sources and/or traffic targets within a single campaign. The campaign analysis in Nifty Stats helps to solve this problem.

But first let's take a look at an example. This is how program statistics with enabled campaign downloads look like in the standard view of Nifty Stats, if you already use campaigns: 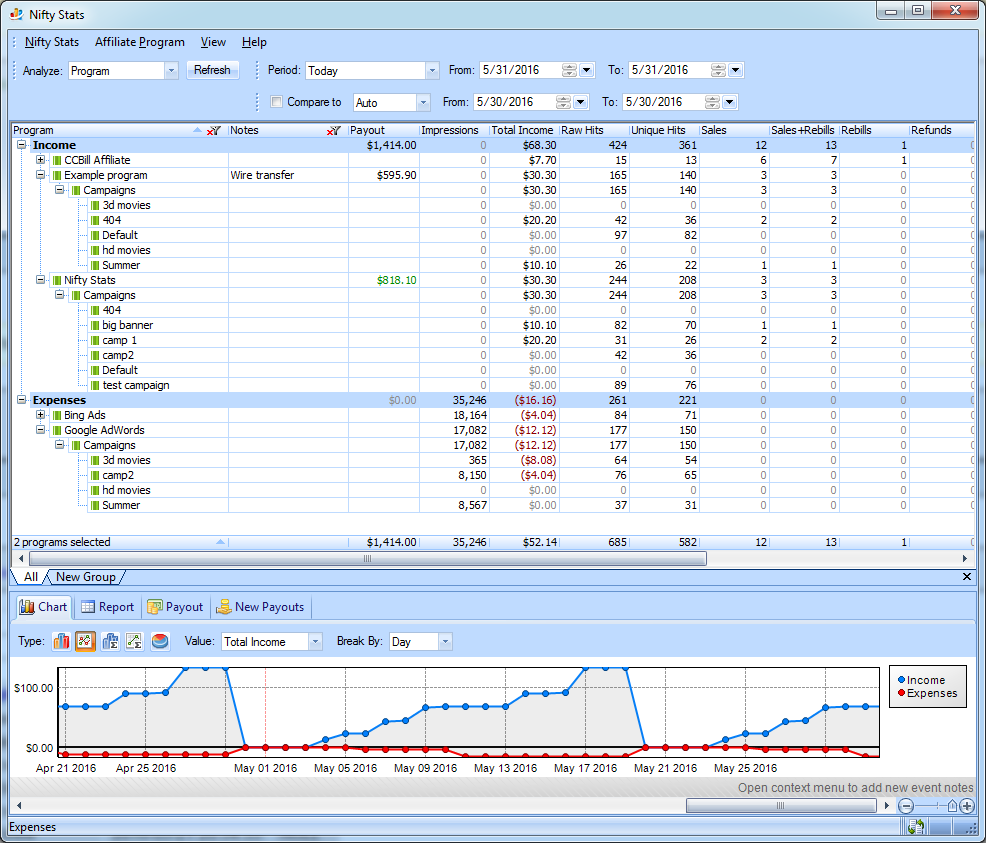 We can see the various programs and after clicking on the details we can see the results of campaigns under each program.

It is necessary for most programs to set download per campaigns at the properties window of the program under the option "Download type", in order for Nifty Stats to download statistics by campaigns. It's possible that for some programs this feature isn't available yet, because the programs in the Nifty Stats database are constantly changing. Don't hesitate to contact us in case you need campaign statistics for a program which does supports it, but it's not already available in Nifty Stats.

In the new version of Nifty Stats a new toolbar called "Analyze" appeared. The basic choice is "Analyze: Programs", which turns on the standard list of programs, which were used in the previous version of Nifty Stats. By turning on "Analyze: Campaigns" you will get an overall view of all campaigns performances for the selected period.

You can sort the list of campaigns by any parameter to find the most effective and the worst performing campaigns. If you have campaigns with the same name across multiple programs, then the statistics for these campaigns will be added together from every program, where it is used. You can easily find out which campaigns are profitable or which ones are making loss, if you are buying and selling traffic under one campaign. In this case you don't even need to own a website, or a landing page, you can track the results of direct links (purchased traffic sent directly to your referral URLs).

The following picture illustrates the situation:

The most revenue for the selected period ("This month") has a campaign called "camp 1". The campaign with the largest loss is called "3d movies". After clicking the details we can see that traffic for this campaign was purchased at "Bing Ads" and "Google AdWords", and the traffic was sent to "Example Program", where no revenue was recorded, thus making a loss that we have just indentified only with a few clicks, so we can immediately respond to the incurred problem.

For campaigns you can see not only the overall results for a selected period, but the daily, monthly etc. charts and tables as well, as you are already used to during program analysis. You can also simultaneously compare campaign results for two selected periods, the same way as for program results using the familiar "Compare to" toolbar visible on the screenshot.

During campaign analysis when one of the group (Group) is enabled then only the programs which are member of that selected group are considered. This gives you an other option for detailed analysis of campaigns, so for example you can find out which type of affiliate programs work best within a campaign, when you have affiliate programs divided into groups according to arbitrary criteria.

New affiliate programs that you can analyze!

This website uses cookies to improve your experience while you navigate through the website. Out of these cookies, the cookies that are categorized as necessary are stored on your browser as they are essential for the working of basic functionalities of the website. We also use third-party cookies that help us analyze and understand how you use this website. These cookies will be stored in your browser only with your consent. You also have the option to opt-out of these cookies. But opting out of some of these cookies may have an effect on your browsing experience.
Necessary Always Enabled
Necessary cookies are absolutely essential for the website to function properly. This category only includes cookies that ensures basic functionalities and security features of the website. These cookies do not store any personal information.
Non-necessary
Any cookies that may not be particularly necessary for the website to function and is used specifically to collect user personal data via analytics, ads, other embedded contents are termed as non-necessary cookies. It is mandatory to procure user consent prior to running these cookies on your website.
SAVE & ACCEPT